During Christmas season, the popular cake/ bread that is ordered from bakeries in Sri Lanka is the breuder. This is a speciality of the Burgher cuisine of Sri Lanka. I had been trying for some time to find someone to contribute a home-made recipe of this delicious bread. I was delighted to finally come across another blogger and invited him to share his family recipe on this blog as well. Here is the guest post of Paul van Reyk, from My Buth Kuddeh food site, with his introduction to his family tradition of baking breuder and his recipe. Wishing you all a merry Christmas!

No Christmas at our house in Sri Lanka was complete without my grandmother’s breuder. It’s basically a cakey bread, based on a yeasted dough but with the sweetness of a sponge cake, related to Italian pannetone. It’s a direct entry into Sri Lanka cuisine via the Dutch Broodtulband named for the fluted ‘turban’ shaped mould used to make it. Further embedding the Dutch connection, brueder is traditionally eaten in Sri Lankan Burgher households in slices covered in butter and topped with a thick slice of Edam cheese. There is something very festive about that red waxy ball which sliced open reveals a pale European sun yellow cheese. Making the breuder, I am transported back to the kitchen of my childhood, watching my grandmother knead the dough, having the thrill of buttering the mould and pressing sultanas against the sides anxious that they stay in place, full of expectation as it was taken to my uncles house across the road as we didn’t have an oven, and then the excitement of un-moulding this magical transformation of so few ingredients hoping desperately that it comes away cleanly. The smile on grannie’s face when it does was more rewarding almost than the first bite into its soft, crumby heart.

Tip: Putting some baking/greaseproof/brown paper on the top will reduce the likelihood of the dried fruit burning.

Resist all temptation to ice or otherwise muck around with the breuder! Just slice it up and have some butter and Edam or cheddar cheese to have it with. But you are allowed to make summer pudding with the left over breuder if you like, or indeed any of those bread pudding dishes.

Today’s recipe is another of my baking experiments. My favourite aspect of cooking is baking. Ever since I tried out Kitchen Cici’s delicious rosemary cheese bread, I have started experimenting with breads. I had originally intended to make pineapple muffins but I guess people at home were kind of tired of my weekly experimental muffins so I decided to switch to bread which I also enjoy making. I adapted Jamie Oliver’s basic bread recipe to include pineapple and cloves. It turned out great so I am sharing it here at the Fiesta Friday. I will not be posting as much over the next twelve months as I did the previous year mainly because I will be away from home. However, I do have some recipes that I am yet to transcribe and post so will try to share at least one each month. 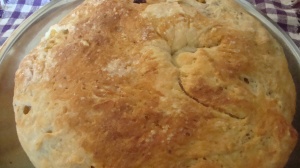 The music feature today is on raï. The first clip is an excerpt of a concert (1990) by Chaba Fadela and Cheb Sahraoui.

The next clip is a recent release of Cheb Khaled, whose song Didi was my introduction to raï music.

Hope you enjoy the music and this delicious bread!

In my mother’s kottu series, I am including one of her dishes she calls the ‘bread kottu.’ Home-baked bread, when leftover the next day or two, never tastes as good as it does fresh. So, when we do end up with a few slices of such bread, my mother makes this kottu dish. I am sharing this at the Virtual Vegan Linky Potluck #8 as well as bringing a second kottu dish late to Fiesta Friday #29.

I received an interesting email a couple of days ago from Ellie Priestman, a researcher at Studio Lambert. After reading the email, I agreed to share the gist of it here on my blog. According to Ellie, Studio Lambert is an independent television production company based in London and “have produced a number of observational documentary and factual entertainment series including Undercover Boss, The Great Interior Design Challenge and the BAFTA award winning series Gogglebox. (More information about the company can be found at www.studiolambert.com).” They are currently planning a production for BBC2 and are “looking for lively and outgoing couples and families who will be happy to show us what happens in their kitchens and around their dinner tables. The series will very much be a celebration of food and family – so we’re looking for people who are passionate about cooking (and eating!) together.” So, if anyone reading this and living in the UK is interested, please get in touch with Ellie via email:  getintouch@studiolambert.com or phone on 0203 040 6875.

For today’s music as part of the A.R.Rahman series, I decided to select a few of his collaborative work with other international musicians to share here.

The first song is an excerpt from the self-titled album SuperHeavy (2011) of the five member group of Mick Jagger, Dave Stewart, A.R.Rahman, Damian Marley and Joss Stone.

The second song is a collaborative work with Persian American music group, Niyaz, from their album Sumud (2012). This song is their interpretation of an Afghan folk song.

The last song for today is an interesting one from MTV’s Coke Studio (2013), fusing Buddhist chants with traditional Arabic tunes and Indian music. A fan of Ani Choying, I love it the way she calmly sits in the midst of all the sounds breaking out wildly around her and continues her chant.

Hope you enjoyed the collaborative music of A.R.Rahman and the other musicians today as much as I did! Let me know if you try out this bread kottu recipe. 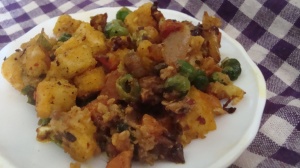 May this special day of Wesak, which celebrates the day of birth, enlightenment and death of Buddha, bring you peace!

I am sharing this post on Angie’s challenge for this month with my recipe for turmeric coriander bread filled with seeni sambol. Ever since I started baking last year, I have found that I enjoy baking different types of bread. One of my favourite and successful breads is rosemary olive oil bread (recipe source: Jessie@A Hint of Honey). Using her recipe as a base, I have sometimes played around with herbs to make different versions of the bread and today, I would like to share my Sri Lankan twist to this bread.

Sandwiches are another globally popular and much consumed food. Everyone is sure to have their own recipe for what they like in their sandwich.

The second recipe I wish to share today is a sandwich that is commonly served at kids birthday parties, tea parties and even cocktail events in Sri Lanka. While there might be slightly different ways on how this party snack is made in the country, I am sharing here the way my mother makes them.