The recipe I would like to share today is my mother’s recipe for karunai kilangu/ elephant yam curry. 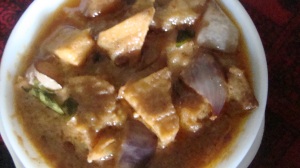 I also felt like sharing some music clips. Today is the birthday of Ilayaraaja, one of South India’s famous movie soundtrack composers, who has composed music for more than 1000 movies (around 4500 songs). His debut in South Indian cinema was in the 70s and while he continues his work to this day, I think the peak in his musical career was in the 80s. Having grown up watching a lot of South Indian movies, I felt like sharing three of my favourite Ilayaraaja compositions in honour of his 71st birthday.

The first song is from one of my all-time favourite movies Salangai Oli (translation: the sound of a dancer’s ankle bells, 1983), the Tamil dubbed version of the Telugu movie Sagara Sangamam. The movie has a Bharathanatyam theme and has a great cast including one of India’s best actors, Kamal Haasan (featured in the song). The movie won the Indian national award for best music direction and best male playback singer (S.P.Balasubrahmanyam).

The second song is from one of my mother’s favourite movies, renowned director K.Balachander’s movie Sindhu Bhairavi (1985). This movie’s story has a Carnatic music theme running through and a great soundtrack which again won Ilayaraaja the Indian national award for best music direction. The movie also won the best actress award (Suhasini Maniratnam, featured in the song) and the best female playback singer award (K.S.Chitra who made her Tamil movie music debut through this song) for the song shared here. This song is a fusion of folk and Carnatic music.

The third song that I am sharing here is a song from Maniratnam’s movie Thalapathi (1991). It’s simply a lovely short song.